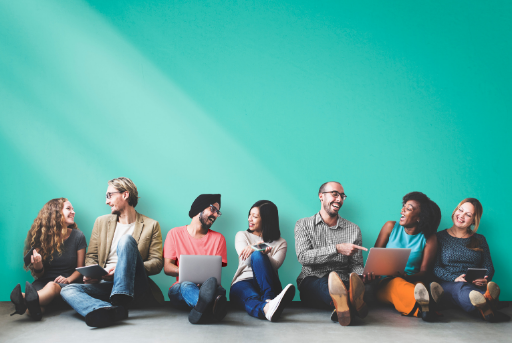 Let’s imagine there are two teams. One is a very diverse team – Jane’s team – with lots of strong and different characters from different backgrounds and with different types of experience. The other is a rather homogeneous team where the team members have very similar characteristics, experiences and backgrounds – John’s team.

In John’s team, he has hired people very similar to him with and within their operating environment (or project space) they don’t cover much of the area. Instead, they ‘congregate’ around John and his ideas, recommendations and leadership. This is primarily because their skill sets are very similar. In an extreme example, this is exactly what Hitler did during World War II. After 1941, he removed independent-thinking advisers and surrounded himself with people who told him what he wanted to hear – not what he needed to hear.

In Jane’s team, she has consciously hired people with a varied skill set and who hold different beliefs and experiences from her. In this circumstance, there is much better coverage of the ‘operating environment’. Churchill demonstrated this approach with his Bad News Department. He recruited independent-thinkers, including leaders of the General Strike. He asked them to give him honest advice that he needed to hear, not what they thought he would like them to say.

Straight away, you’ll see that a diverse team seems to be the more progressive approach, (especially in war!), but equally in any organisation. However, is it as easy as recruiting diverse members to a team to make an organisation a success? Unfortunately, it is not.

One of the main problems with diverse teams, is their perceived effectiveness. It is much lower than that of homogenous teams. It has also been shown that their overall confidence levels are often lower (Phillips, Lijenquist & Neale, 2009). They don’t believe in their own effectiveness. However, the actual task performance of diverse team is proven again and again to far exceed the task performance of homogenous teams.

The gains from having a diverse team are worth these negative perceived effects. Importantly, these effects can also be easily countered if you ensure high psychological safety, where people feel encouraged to share differing opinions and leaders use this to move towards the best outcomes for a common goal.

In diverse teams, there is more potential for conflict and people often report less satisfaction because they have to work harder to work together to overcome their differences.  However, in doing this, individuals are forced to speak up and share varied opinions and options for solving a problem. There is less ‘group think’ and more social intelligence. Again, this leads to more resourceful outcomes and greater success.

When diverse teams are no longer diverse

There is a common trap that diversity within a team can slowly decrease. As a team of people work together for longer, they become more aligned and homophily occurs. Once ‘independent-thinkers’ start to fall in behind the ‘loudest person’ or the one who exerts most influence, such as the team leader or line manager. Those who don’t become aligned become even more dissatisfied and, in many organisations, will feel left out from the ‘in group’. It most cases, they leave. This leads to an even more homogenous team.

How can you maintain diversity?

You must encourage inclusion and not alienate those with differing and diverse opinions, in your organisation. It is important to encourage debate. This must never be dismissed. Ensure everyone has a ‘voice’. As David Rock stated:

“If you’re not deliberately including, you’re probably excluding.”

If you are chairing or leading a meeting, here are the best ways to continually encourage inclusion and gain diverse opinions:

Building diverse and resilient teams throughout your organisation is so important to ensure you can weather the challenges of change and transitions, especially in 2021. A strong team will support each other through a crises and strive for the best outcomes, even if there is a little conflict and debate along the way.

Learn more about the power of diverse teams, resilience, how to secure high levels of psychological safety and so much more, in our Mindset and the Neuroscience of Leadership programme.

Collaboration and creativity – Improving your team’s performance Caroline Gumble Interview – CIOB Event Be the reflection of how you want your employees to be Decision-making: can you trust your instincts? Performance review – love it or hate it? Want to play guitar like Jimi Hendrix – is it nature or nurture?